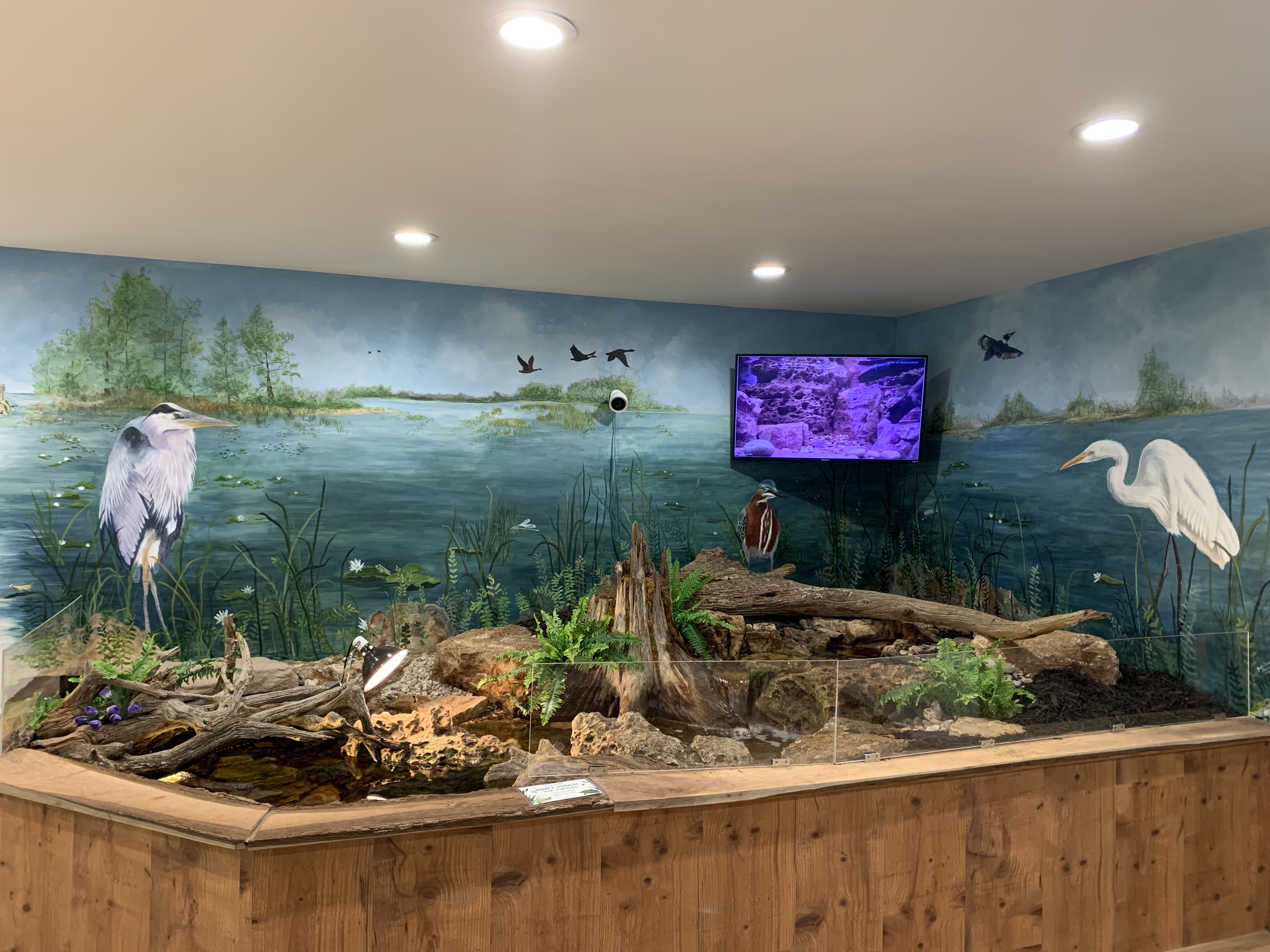 If you visited the center from May 16th to May 26th, you may have seen Janet Stearns perched on top of the newly installed turtle pond, painting a mural. The quintessential scene of an Ohioan wetland only took Stearns ten days, though she painted for twelve to fifteen hours a day.

Stearns has always been connected to the Lake Erie Islands. Her family has had a house on Middle Bass islands for generations, starting with a steam ship captain and US marshal from Cleveland. She spent childhood summers running around the islands. Her connection to Middle Bass solidified when she painted a mural at the General Store, ensuring that her name will be remembered.

It was this mural, and the one at the Fishbowl on Put-in-Bay, that made Renée Fultz, Director, advocate for Stearns to be the muralist at the Nature and Wildlife Center. Fultz and the board of directors wanted a local artist, and Stearns’ work can be found all over the Lake Erie Islands and mainland: Ashtabula, North Bass, and several in Geauga County, where Stearns worked as a bus driver for 30 years. Stearns specializes in wildlife painting and presented past work to the Board. Without debate, Stearns was chosen to paint the murals at the nature center.

While the painting process only took ten days, Stearns spent a few weeks preparing. The birds are true to size, so she had to measure the wall, calculate the proper proportions, and sketch out the mural. It was a long process, but worth it.

Stearns’ favorite part of the process was all the people she met.

“It was fun!” she exclaimed. “Everyone was so kind.”

Painting the mural wasn’t easy. She had to lay in awkward positions, maneuver her way around the waterfall, and kneel on rocks.

“My knees are still black and blue,” Stearns said smiling.

One day, Stearns was painting during the weekly yoga class, and after seeing the positions Stearns was in, the yoga teacher invited her to join the class.

“I got up and painted another three hours after that!” she said.

The mural was completed May 26th and fit in beautifully above the pond.