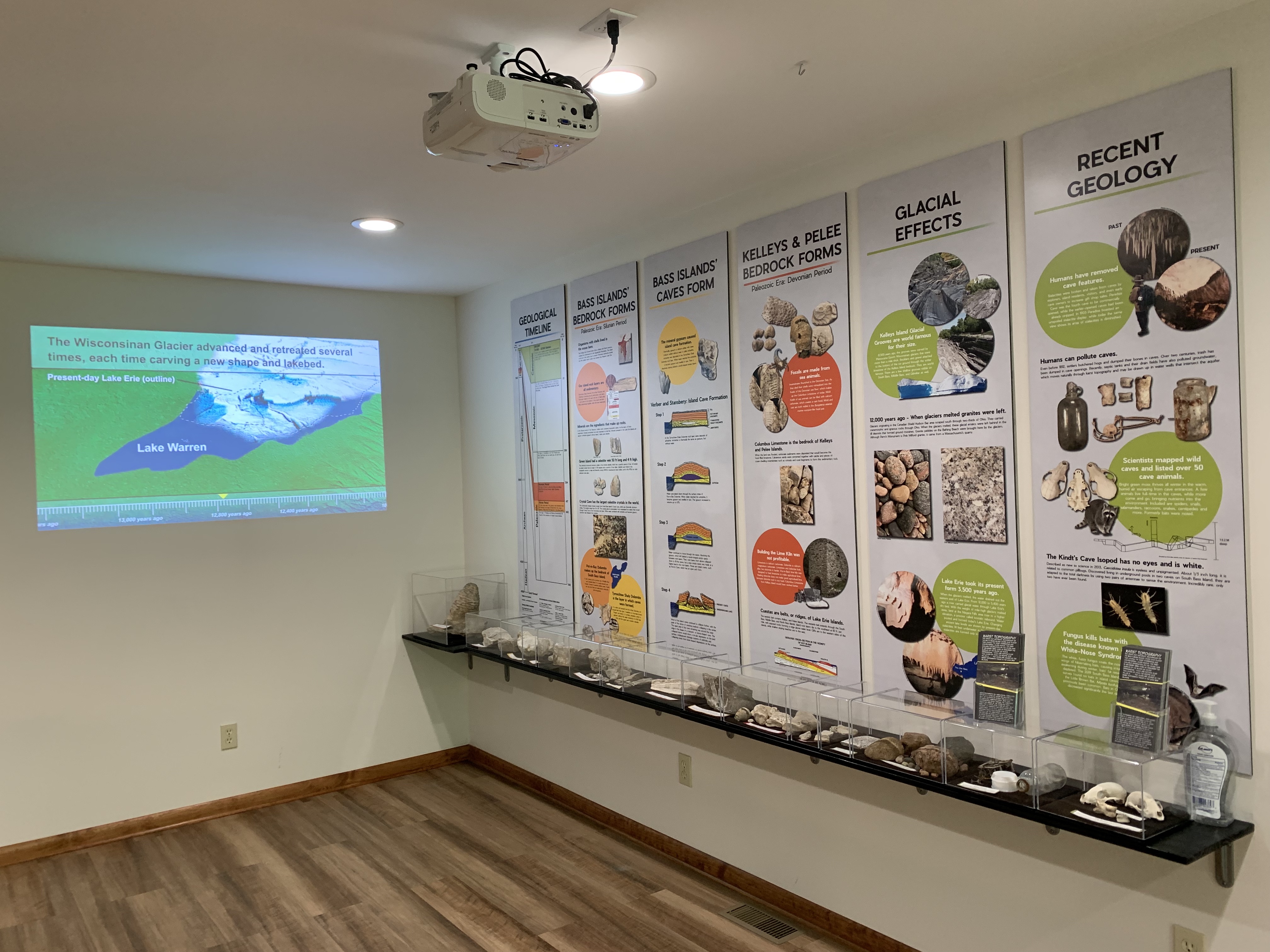 The Nature and Wildlife Center Welcomes a New Geology Section

As part of the recent renovations, the Lake Erie Islands Nature and Wildlife Center added a geological section explaining how the South Bass caves were formed and human interactions with the island’s rocks. Most recently, the center added an animation projected onto the wall, illustrating how exactly the islands formed.

In the Silurian and Devonian periods (500-350 million years ago), Ohio was covered by an ancient, tropical ocean, forming Pelee Limestone, Put-in-Bay Dolomite, and Tymochtee Shaly Dolomite. These rock formations were tilted when an island arc rammed into North America, which formed the Appalachian Mountains.

For hundreds of thousands of years, glaciers and river eroded and carved the bedrock to form deep valleys and the Lake Erie basin. The Wisconsinan Glacier from the most recent Ice Age in the Pleistocene epoch, around 10,000 years ago, advanced and receded many times, forming the Lake Erie basin as we know it. The glacier movement back and forth left well-developed beaches, instead of rocky cliffs like those you might find in Maine. The Lake Erie basin was finally filled with water a few thousand years after the Wisconsinan Glacier receded due to the crust rebounding from the release of the weight of the glacier.

The cave formation is another interesting story. Under the Put-in-Bay Dolomite formation is the Tymochtee Shaly Dolomite, where the caves formed. In the shale, there was a pocket of anhydrite, a mineral made of calcium sulfate. Water from the lake moved through the shale and into the anhydrite pocket. This transformed the mineral into gypsum, which is the same chemical composition of anhydrite with water.

The addition of water and formation of gypsum increased the volume of the pocket by 63 percent. Water kept leaking into the gypsum and eventually dissolved it, leaving a hole in the rock layers. With nothing holding up the rocks, they collapsed. An empty space was created on the top layer, and the caves formed around the fallen rock. When the caves were formed, they would have been donut shaped. From the surface, they look like a circular depression in the ground.

Lake Erie and the caves have been relatively stable for the past 3500 years, with exception of changing weather patterns.

We were able to add the animation due to the support from Ottawa County Community Foundation, Andy Nash and Mark Jones from the Ohio Geologic Survey, Dr. Charles Herdendorf, and Orange Peel Productions. The geologic display is thanks to Dr. Herdendorf, Amy Huston and the Randolph J. and Estelle M. Dorn Foundation. Both exhibits add to our holistic approach to teaching visitors about the thriving ecosystem that is Lake Erie and its islands.